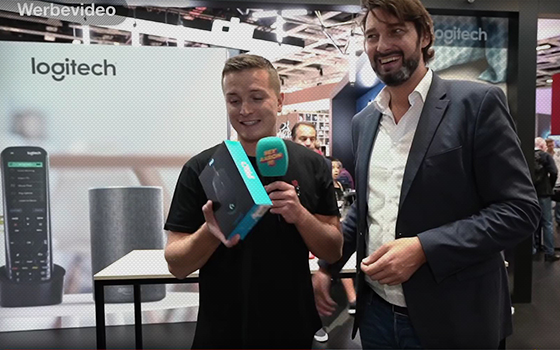 The task was to introduce a young target group to Logitech's latest products, which are presented every year in September at the IFA trade fair in Berlin. Faktor 3 cooperated with the YouTuber Aaron Troschke, who is presenting on his channel "Hey Aaron!!! Posts videos from the entertainment and comedy sectors, reaching around 1 million viewers. Together with Aaron Troschke and his focus on a more youthful target group, a concept was developed for a trade fair video that he published on his YouTube channel. In the video, Troschke is equipped with a handcart on a prowl for his fans. In his typical cheeky manner he walks through the halls of the fair and collects goodies to raffle them off to the community. When he arrives at Logitech, he of course really skims the mark. Andreas Kunz, PR & Marketing Manager DACH at Logitech, comments briefly on each product in a conversation with Troschke and then generously donates the latest products to the YouTube community.
In less than 24 hours, Video has more than 500,000 views and has over 80,000 positive reactions to Logitech and the speaker of Logitech Andreas Kunz, who is now celebrated by the community as #Honeman. YouTube rated Troschke's IFA booty as a relevant content and within a few days it was among the top 3 trends on the platform.
https://www.youtube.com/watch?v=MjvUGrQQmCc
back to top