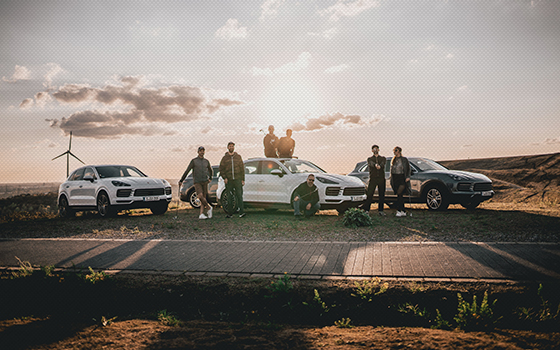 Porsche gives Golfsport and Cayenne a new coat of paint

#porschecrossdrive: Porsche gives golf sport and Cayenne a new look Six influencers, three Porsche Cayenne, lots of kilometres and five special locations - the perfect mixture for a road trip of our customer Porsche from Leipzig to Amsterdam. Under the motto #porschecrossdrive, bloggers Ben Diedering (Dressed Like Machines), Markus Herrmann (Falsche Neun), Fabian Sixt (Good Sundays), Katrin and Lisa Tochtermann (Travellers Little Treasures), Luca Jaenichen (German Roamers) and actor Jan Hartmann (RTL/ZDF) have set off to completely new places to play Crossgolf - an urban and young variant of the supposedly dusty golf sport. The idea: There are no holes or courses like in classic golf, but you play in the middle of the city, in the park or simply where you are. Put the ball down, coordinate the route, get going. They were led by Claudio Orlik, team manager of the German national crossgolf team and European champion. In order to combine this sport with the Porsche Cayenne, the colourful squad went to special spots, which also offered the best opportunities for one or two photos. And so the off-road circuit of Porsche was played at the Leipzig plant, on the historic Wernigerode castle grounds in the Harz mountains, on an impressive slagheap in Gelsenkirchen, on the abandoned Expo grounds in Hanover and between windmills at the gates of Amsterdam in Holland. The group of very different content creators managed to harmonize wonderfully with each other and not only bring one or the other ball to its destination under the best weather conditions, but also collect a lot of material for their blogs and Instagram channels. The project belongs to the series of "young marketing ideas" for new target groups for the Porsche Newsroom and comes from Factor 3. The responsibility for the factors also included the entire tour and influencer selection, travel support and overall orga for the project. The first results are already available under the hashtag #porschecrossdrive on Instagram and soon with lots of moving pictures on the Porsche Newsroom.
back to top